Jun 18 Posted by Jennifer Casey in Immigration and Firm News 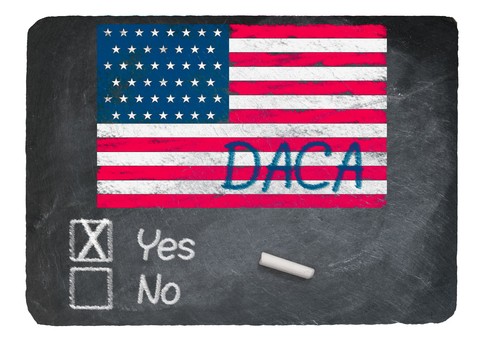 On June 18, 2020, the U.S. Supreme Court issued its decision in Department of Homeland Security v. Regents of the University of California, et. al.

In a 5 to 4 decision, Chief Justice Roberts delivered the majority opinion of the Court, holding that when the Department of Homeland Security (DHS) announced the termination of the Deferred Action for Childhood Arrivals (DACA) program in September 2017, it failed to consider all relevant factors and sufficiently justify its decision to terminate DACA. Therefore, the Court held, DHS’ termination of DACA was “arbitrary and capricious” under the Administrative Procedures Act (APA). The Court held that if DHS wishes to terminate DACA, it is permitted to do so, but it must start the review and process for termination of DACA anew.

The Court’s ruling today is a tremendous relief to hundreds of thousands of DACA recipients and their families who can now take comfort in the fact that their DACA protections will remain intact, at least for the near future.

How did we get here?

On June 15, 2012, President Obama announced the DACA program. Under the DACA program, qualified individuals can submit an application to the U.S. Citizenship & Immigration Services (USCIS) for a two-year deferral of any action on removal and a corresponding employment authorization document (EAD) for that two-year period. With the issuance of an EAD, DACA recipients are eligible for Social Security and Medicare. Individuals who continue to qualify for DACA can renew their DACA protection every two years.

Since DACA’s inception in 2012, more than 700,000 people have applied for and received DACA benefits.

On September 5, 2017, the Trump Administration, through a memorandum issued by then Acting Secretary of DHS Elaine Duke, announced that it would terminate the DACA program.

Importantly, the Supreme Court held that the Trump Administration and DHS do have the right to end DACA, but that the agency terminated DACA in the wrong way this time. Specifically, DHS did not consider all of the relevant factors, including DACA recipients’ “reliance interests” on the program, when it terminated DACA.

Additionally, the Court’s ruling opens the DACA program back up to individuals who are otherwise qualified for DACA, but who had not already applied for or received DACA prior to the Trump Administration’s termination of the program in September 2017.

Since early 2018, with the filing of the various legal challenges to DACA termination, only people with existing DACA approvals were able to apply to renew their DACA applications with USCIS.

More information on the DACA application process for current DACA recipients for new applicants should be forthcoming from USCIS.

What about the long-term?

It is important to recognize that the Supreme Court confirmed that DHS does have the power to end DACA. Today’s opinion simply held that DHS did not end the program in the correct manner. Therefore, we can expect that DHS may attempt to end DACA a second time. However, for the agency to lawfully end the DACA program, it will likely take many months of drafting and analysis, so it is unlikely that DACA would be lawfully terminated before the end of President Trump’s current administration in January 2021. If Trump is reelected for a second term, we can expect that his administration will terminate DACA in the future.

This underscores the “temporary-fix” that DACA has always been for hundreds of thousands of immigrants.

It is long past time for Congress to take decisive action and pass a Dream Act that provides lawful status and a path to U.S. citizenship for people who were brought to this country as children and do not hold a lawful status. We encourage you to contact your Congress people and ask them to sponsor, support, and pass a Dream Act that ends the limbo that so many of our community members have been living in for the better part of their adolescence and adult lives.

Please do reach out to us at Kolko & Casey, P.C. with questions regarding DACA or other immigration matters.